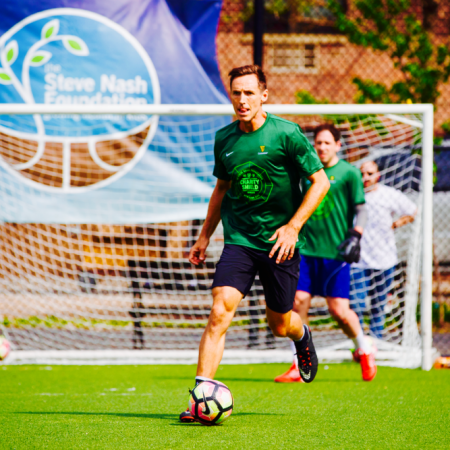 What a day! Our inaugural Steve Nash Foundation Charity Shield couldn’t have been more fun – no doubt due to the incredible people that came out in support!  From our sponsors – Nike, Guinness, Owlee Audio and The Gem Saloon – to the companies that fueled us on the field – BodyArmor, Rumble Supershake and Phebe’s Tavern & Grill – to the amazing volunteers that powered through two full days on the ground with us (we’re looking at you, men and woman in orange), we lucked out.

It all started at The Gem Saloon, our host pub: Guinness was flowing, and a much larger crowd than we anticipated filled the room – our players patiently waited to register (fear not – we’ll fix this next year!) while Guinness entertained at a customize pint glass engraving station, the Gem fed folks, and players and early bidders explored their Charity Shield gifts, courtesy of Nike, Owlee Audio, Aloha Collection, and WithinUs.

Then it was time for the night to begin : Steve took to a prime banquet to introduce Seamus McCracken of Owlee Audio, who presented the Owlee Audio Give A Hoot Award to Gem Saloon owner and all-around-wonderful guy Derek Kierans.  Once we’d done embarrassing a gracious D, Steve introduced emcee Kyle Martino for the main event: the auction.

Early bidders and new-to-the-night bidders alike grabbed auction paddles, as Kyle called teams up one by one to go on the auction block – the night started strong, with Steve’s team going for the night’s top dollars, and rolled from there, with bidders getting to know the players they were backing to win it all.  Safe to say that no one had ever heard an auctioneer quite like Martino!  As the Guinness continued to flow, we ended the night with a draw to win a night’s stay at the Hotel Indigo LES – two fierce competitors battled it out, with an old friend and longtime SNF volunteer winning the random pick!  Those of us who shut the bar down at 3am were treated to an epic lightening storm that threatened some big weather for game day.  Those of us who woke up at 5:30a to get to the field still enjoyed it.  But as we arrived at the pitch, the sun was shining brightly – as if, as our incredible volunteer, Kellie, suggested, the weather gods said “oh, right, it’s a Steve Nash Foundation soccer event – dial up the summer weather.”

Players started arriving at 9am, as DJ Sky Gellatly got the music going and set the tone for a big day.  Teams of five donned their Nike jerseys (printed by our friends at Sports Time), laced ’em up, and got kicking.  Through four games of Pool Play (including a delicious lunch provided by the Gem Saloon), eight teams emerged from the 80F sunshine (thank goodness for the hydration, courtesy of BodyArmor and Rumble!) into the Shield Rounds, a single-elimination bracket that culminated in a showdown of its own: Steve’s team (Team One) versus Gem Saloon founder Derek Kierans’ team (Team Fifteen).  In the end, the team of Steve, Brooke DeRosa, Lawrence Ziegelbaum, Mike Olim, and Marco Scipione bested their opponents, taking the first Charity Shield, which was graciously presented by not only another competitor, but the owner of Team 15: Gem Saloon owner Ryan Birkenhead.  Steve then took to the mike to present the Charity Shield MVP award to his teammate, Brooke DeRosa, who wins a spot in our 10th annual Steve Nash Foundation Showdown (coming June 21st to Sara D. Roosevelt Park – get your tickets now)!

The day wouldn’t have been the same without our wonderful sponsors – Nike, Guinness, Owlee Audio, The Gem Saloon – and supporters – Sports Time, BodyArmor, Rumble Supershake, Aloha Collection, Phebe’s Tavern and Grill, and WithinUs – and volunteers: the guys from St. John’s University men’s soccer program – Jeff Matteo, David Targett, Tommy Mickoski, Andrea Previati, Dimitri Mendrinos, Zachary Shiposh, Alistair Johnston, Filippo Ricupati, Marco Torriani, Ben Roth, and Wilhelm Nilsson, who not only hung signs, refereed and kept score, but filled in for players where needed with high-energy skill that had us in awe – and, on loan from Aloha, the wonderful Kellie Davidson.

We can’t wait to keep growing this event, and look forward to seeing you in the pub and on the pitch next spring!  Check out the photos below, and register for 2018 today!