Heading into our 10th Showdown in eight years, Steve couldn’t have been more excited — his summer workout regimen has always featured soccer, and Showdown is a chance to go toe-to-booted-toe against some of the world’s best.  This year, Alessandro Del Piero — a good friend to Steve — committed early, and, along with beloved mainstays like Giuseppe Rossi and Kyle Martino, set the bar high on the recruitment side.  But, as always, we had players who were all in for a good cause, and our teams came together beautifully:

The day began with stops at Good Day New York, and Pix 11 Sports & News with Andy Adler (where we ran into the talented Corey Stoll), talking Showdown with the masses (Steve had stopped by Boomer & Carlton’s morning show, the Player’s Tribune, and HuffPost Live with Marc Lamont Hill the day before, debuting our Under Armour kits designed by Media One and hot off Uni-Sport’s heat press with an assist from Kicks to the Pitch.

Then it was off to GNC Live Well to meet store ambassadors, learn about GNC’s new health products, and welcome our contest winner, Tsung-Yao Hsu, and his friend James (a Vancouver fella!) to Showdown.  From there, Steve & Yao made their way to a great neighborhood court, where they played an intense game of pig — Yao, who couldn’t have been nicer, turned out to be a bit of a ringer, hitting twelve shots in a row before ultimately losing the friendly to our two-time MVP (if you’re going to lose to anyone . . . .).  Yao & James were then treated to lunch by our friends at Phebe’s Tavern & Grill, and Steve hustled on with the rest of his day. . . .

Next stop, the historic Henry Street Settlement!  Since the 1800’s, Henry Street has been providing critical services to the Lower East Side and beyond — from pre-K to elder care and everything in between.  We took the opportunity to introduce them to our friends Kris Perry, Charlie Joughin, and Sarah Rittling of the First Five Years Fund, the policy team behind the Invest In US campaign and so many recent advancements in early learning, and had a great time with the preschoolers of Henry Street.  “Mr. Steve” read a little Mem Fox, and we dug into some serious puzzle works.  We hope to be back soon!

Finally, it was time for Showdown to get underway: Steve headed to our Player Lounge to meet up with the guys, have some delicious empanadas from the brand new Empanadas, Son!, and get suited up.  With another hot summer day, we were grateful to have some GNC protein smoothies and Body Armor on hand, and Tabl’Eau sparkling and still water on tap!  The guys took time to vote Red or Blue as part of Windows’ Major League Soccer’s Rivalry Week activation (leading up to the Empire State Building lighting up in support of the team with the most votes), and engage onCyber Dust’s disappearing text app (yes, you need it).

Meanwhile, it was a busy afternoon at the pitch!  The GNC Live Well FanFest opened at 4pm, with our sponsors engaging Showdown fans and downtown visitors with engaging, innovative experiences: GNC held court with incredible product giveaways and sampling; Under Armour provided a try-on station matched with a chance to experience the Speedforms and Clutchfit shoes the guys were wearing in the match; Jawbone dazzled with their latest UP2 Band, and chances to win exclusive gear; Major League Soccer’s New York Red Bulls and NYC Football Clubs let fans kick it with them; Windows was on hand recruiting votes for the teams in advance of the MLS Rivalry Week Sunday match — Windows worked with MLS to light up the Empire State Building on Saturday night before the game, with MLS supporters everywhere voting to decide the color of the building; and Body Armor kept everyone cooled off and hydrated . . . including the kids!  Our Showdown youth clinic this year was presented and coached by Steve’s longtime favourites, Tottenham Hotspur FC, visiting from across the pond to help bring football to NYC.  The kids enjoyed a free, incredibly high-level soccer clinic focused on nurturing skill and joy (including some hot new kits from Under Armour and Tottenham – on sale now!), and then stayed on to watch the evening unfold from a front row view.

And then . . . . the parade of champions began.  With our hotel so close to the field, walking over has become a bit of a tradition.  This year, Jay DeMerit added some hot tunes to the experience, and our little parade was hoppin’.  Once on the field, the guys were met with a crush of media, and after meeting with fans for autographs on the pitch, the pre-game festivities began: our repeat (re: fantastic) on-field MC Spero Dedesbrought TAG Heuer’s North America President, Kilian Muller, to centerpitch to present the Spirit of Showdown award to Alessandro Del Piero.  Ale was honored with a Aquaracer Automatic, a lovely keepsake for a lovely friend of the Foundation.  NBA Hall of Fame’r Chris Mullin next took the field to introduce Steve, and GNC’s Executive Vice President, Chief Marketing & E-Commerce Officer (and dad to Nick!) Jeff Hennion then joined him to introduce the GNC Live Well Showdown Contest Winner, Yao, who won a full prize package, complete with GNC gifts, JetBlue travel certificates, a stay at the Sixty LES and more.

Last but not least in our pre-game hullaballoo, Spero welcomed Official Showdown Outfitter Under Armour’s Kyle Albrecht, who presented the game ball to Steve.  We so appreciate Kyle, Shawn, Tai, Peter, Adam, Doug and their whole team — Under Armour was a last-minute addition to the roster, but an incredible teammate, making clutch moves with the speed and precision of their boots!  The guys (and our fans) loved this year’s uniform — a few pieces are on sale now!

Game time!  Giuseppe Rossi opened it up, with another beautiful goal from our perennial favorite — Beppe’s cheering/chanting/singing section of our bleachers is an event unto itself every year.  It wouldn’t be his first, but it was his first Showdown hat-trick!  It’s tough to explain if you haven’t been there, but Showdown isn’t your typical charity match: this game is sharp, and our players play to win — the competitiveness is palpable . . . and kind of charming.  Goals followed from Kyle (who scored twice), Geoff Cameron (who appeared to be on wheels), Ale, Massimo, Luol Deng (who shocked everyone with his football skills, and two goals), Marc Stein (who silenced the doubters!), and John Nash, Steve’s dad and a former football pro (he began playing in the Conference in England, before going on to play professionally in South Africa)

After the match, John was selected by TAG Heuer as the recipient of the Steve Nash Foundation Showdown TAG Heuer Don’t Crack Under Pressure Most Valuable Player Award and received one of the brand’s Aquaracer timepieces.  He couldn’t have been more appreciative, and the guys were happy to celebrate a great man together.

This year’s Showdown was sponsored by GNC, Cyber Dust, Major League Soccer, Under Armour, TAG Heuer, JetBlue, Windows, Body Armor,Jawbone ®, Kicks to the Pitch, Uni-Sport, and Phebe’s Tavern & Grill.  Thanks to all who came out to support, and the incomparable team that works with SNF to make Showdown happen: the Promotion Factory and Bigger Goals Group.  Check our Instagram @stevenashfdn for photos, get your Showdown gear here, and we’ll see you next year! 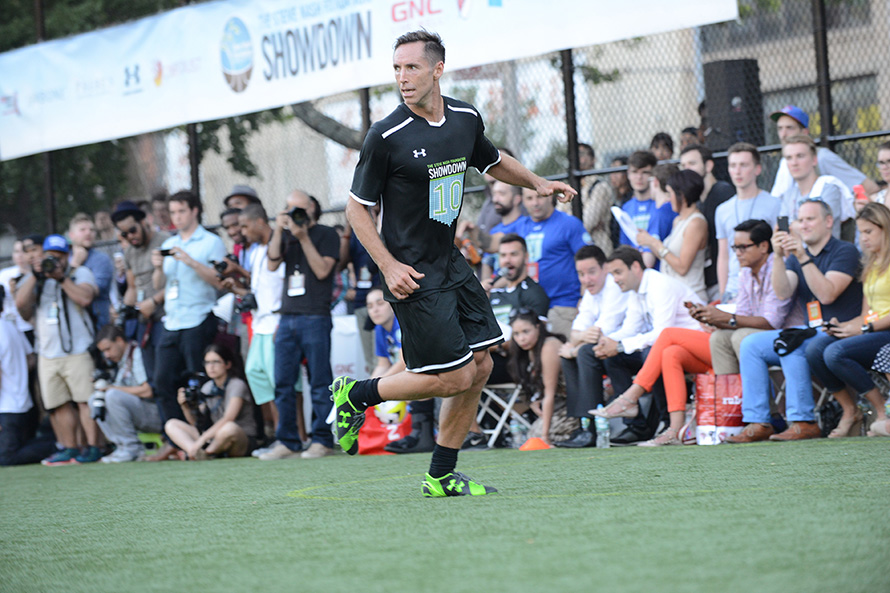 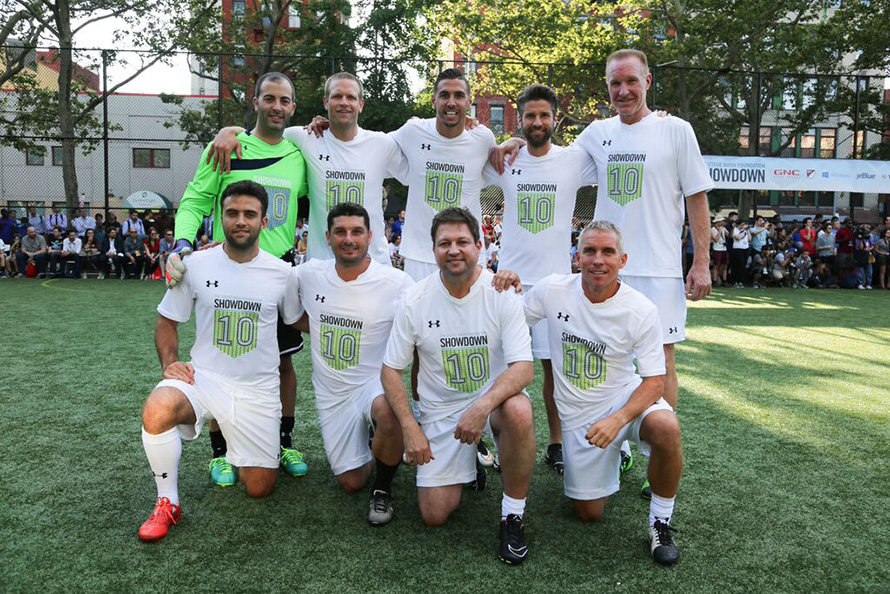 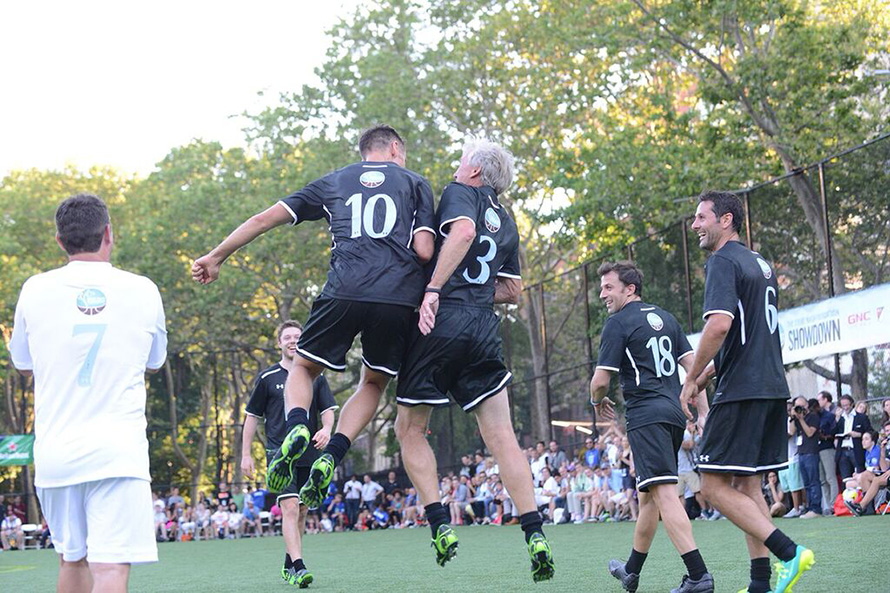 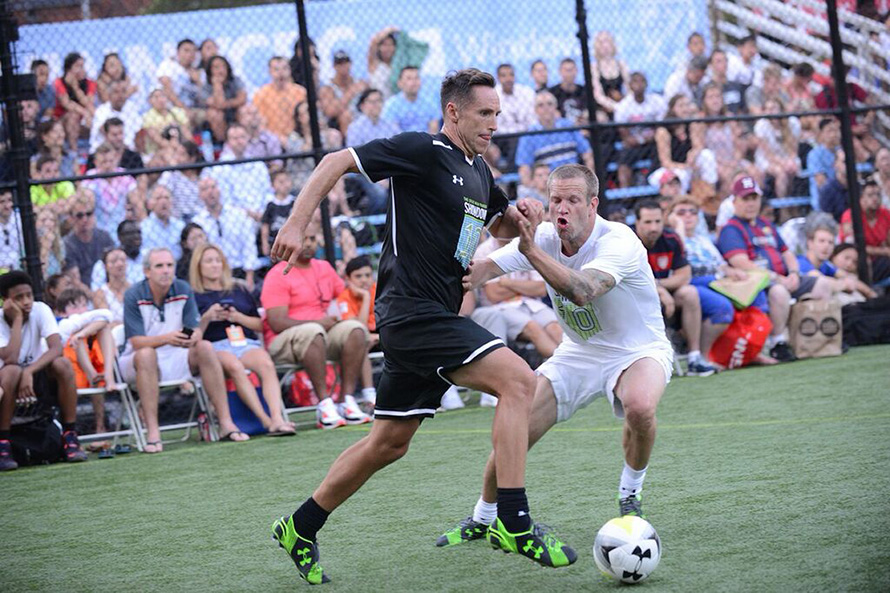